It seems like a good time to make public lighting part of a more complex and efficient interconnection system, typical of the so-called Smart Cities. As the world population increases at an ever faster pace, driven by urban expansion, the idea of creating a more sustainable and liveable city is becoming more and more important.

We are starting to realize that the planet’s scarce resources may not be enough to support the peak of the population that is increasingly concentrating in the cities.
Besides the issue of urbanization – projections show that by 2050 more than two-thirds of the world population will be concentrated in the cities -, it became necessary to deal with the energy problem. As cities are rapidly expanding – they represent 70% of the world’s energy consumption and greenhouse gases emissions – there are growing concerns about the cost and the availability of energy and resources, as well as about their environmental impact.
Rapid urbanization across the world represents a challenge for people living in industrialized areas, to provide citizens with a decent quality of living.
New information and communications technology (ICT) and better means of communications have created new opportunities to improve urban life with intelligent and highly efficient solutions. Among them, there is the idea of an intelligent network infrastructure for public lighting, which can help improve the quality of life, safety and energy efficiency in public places all over the world.

How can public lighting help improve our society and the environment?

Below you will find present and future perspectives of this technological revolution about smart public lighting.

This new technology can help:

The next generation of street lighting will feature complex interconnected systems.
Many cities around the world are already experiencing smart lighting systems, which can be controlled remotely.
These solutions lower the local electricity costs, enable the so-called demand-driven lighting and reduce CO2 emissions.
Future projections predict a further step forward: experts are planning to connect lamps to a network as if they were elements of a multifunctional communications network for smart cities.
Turning night into day and lighting up the darkest areas of the city have represented so far, the main purposes of street lighting. In the future, however, street lamps will satisfy many other functions.
Street lamps will alert waste collectors when the neighbourhood bins need to be emptied, or will be able to register a change of traffic and send key data to an intelligent transport system (ITS).
Street lighting will no longer be an isolated element, but will be part of the urban infrastructure network.
The philosophy behind this vision is the so-called “Internet of Things” (IoT) and the concept, associated with it, of smart cities. Every single object located in a public space and its way will be connected: cars, containers, street lamps, car parks and so much more.
Every item will measure various parameters in its own environment and will digitize the citizen daily duties, such as finding a parking space.
The core of this change is the concept of machine-to-machine (m2m) or the automatic exchange of data between devices that are connected to each other and with a control centre.

The public sector has already understood the many possibilities that a more advanced network could offer.
Smart City solutions represent the key to reducing energy and maintenance costs, while complying with the protection legal requirements, respecting the environment and providing better services to citizens.
Smart street lighting plays a central role. In fact, in many cities, faulty lamps represent about 20% of citizens’ complaints and smart systems capable of self-repairing faulty devices, will reduce this public issue.
A programmable lighting system combined with LEDs, can reduce by up to 70%, the urban electricity costs. However, today the primary purpose of this type of artificial lighting isn’t anymore to illuminate darker areas. The effect that lighting has on people’s lives and well-being goes far beyond its main purpose.
Light, in fact, influences the way people live their lives, even in public spaces. 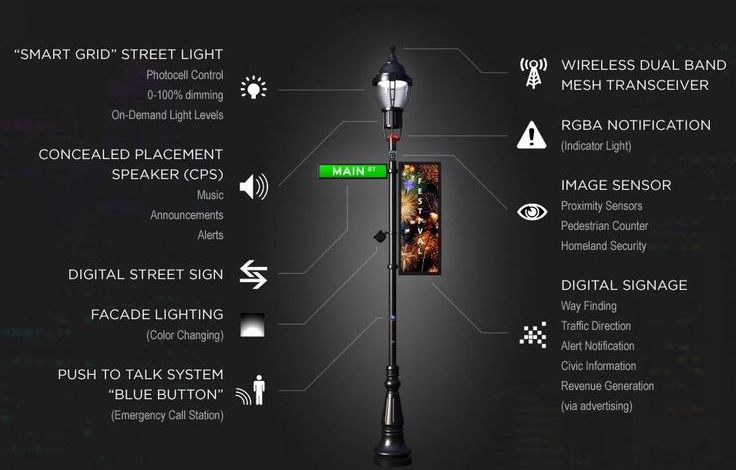 The effects that light can have on humans are already well known.
They do not only modify the atmosphere in households and workplaces but they can also make a difference in public places.
Scientific studies have strengthened even more the role of lighting and this has increased awareness about smart lighting solutions in urban areas and as they could play an important role in achieving a real social change.
The atmosphere of a city generates social behaviours which may be influenced by outdoor lighting solutions, making public spaces more attractive.
Cutting-edge studies aren’t to be considered as the sole responsible for public smart lighting innovations. Lighting innovations are also the result of human and urban planning ideas.
The future will be made of cities where, thanks to motion sensors, smart street lights will automatically turn off when people aren’t around, but as soon as a car, a bicycle or a pedestrian will be passing by, they will switch on and will be lit up until people will be around.
These new LED lighting systems can be controlled by computers, meaning that every lamp can be individually controlled, to offer the best of technology to every single citizen.