According to a common opinion, smart locks are the future of home security. Smart locks are computerized locking systems that do not use the mechanical mechanisms of traditional locks but new technologies for closing and opening the doors of the house.Today, on the market, there are several types of smart locks available for purchase: the most popular locks are those that exploit smartphone technology and fingerprint reading.
For a total digital control of the premises, both systems can be easily installed as part of a greater home automation system. Smart locks aren’t that new on the market.
It’s been a few years since several companies have worked on the implementation of smart locking systems. However, only in recent years, with the launch onto the market of more and more precise and advanced / theft-proof models, there has been a real evolution of the industry.
As technology research is making great strides in the field, the industry is still growing.
That’s why those models that have recently been introduced on the market can be considered nearly perfect and a 100% reliable. 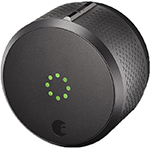 August smart lock is one of the models available on the market.
Today is only available on the American market and developed with a contribution by Apple.
For users outside the US, it can exclusively be purchased online, while in the US the purchase can be made at the Apple Store.
The system is an intelligent locking device which is controlled by a smartphone app, compatible with both iOS and Android operating systems.
The lock doesn’t feature a keyhole: August does not need any mechanical support for opening and closing doors, the smartphone is the only tool required.
You do not even need to take your phone out of the pocket or bag, as the August sensor identifies your smartphone and simply unlock the door thanks to a very advanced proximity sensor.
The core of this technology is a 4.0. Bluetooth Sensor, which automatically connects with the registered smartphone.
Basically, August allows the connection of an infinite number of devices, however is the lock administrator who completely manages the inputs and outputs.
In fact, apart from registering the family members’ smartphones or, the employees’ smartphones who need access to the office, you can create temporary access keys that allow entering the premises only a certain amount of times or for a limited period.
The administrator can also give, to the connected smartphones, three different access levels, to better control the different entrances, while unlocking a lock in the event of a safety lock.
Finally, through the app, August technology records and controls all the points of entrance, always keeping an eye on any person entering or leaving the premises.
Don’t worry if August is only available on the American market as in Europe and more specifically in Italy, we have valid alternative systems that exploit the same mechanism.

Argo is part of the above mentioned valid alternative systems available on the Italian market.
Iseo Serrature is the company that manufactures this system, which is considered as one of the best smart lock systems currently available on the market.
The operating mechanism is the same as the one presented by August.
The administrator of the lock has full control on the access and thanks to a smart memory, the last 1,000 entries to either the room or the premises, can be recorded.
The system will also indicate when and at what time the door has been open and closed. The proximity sensor range is around 10 meters.
The covered area is wide enough to ensure a total opening comfort.
Thanks to a magnetic identification system, Argo, unlike August, can also be operated and managed through a smartwatch or a badge.
The management software is constantly updated and this makes the lock theft-proof and as safe as possible at any time.
The Argo lock has been conceived to be used for private houses and installed as part of a greater home automation system.
However, as we are talking about a smart system, Argo can be successfully used in different fields, such as in hotels.
With Argo, it is possible to create temporary access keys, limited to the period of the guests stay, while eliminating the inconvenience of having to leave the key at the checkout and eliminating any possibility of having the hotel key stolen.

If smart locks operated by smartphone apps are handy, so they are those that use another technology that in recent years has demonstrated an incredible evolution.
We are talking about smart locks operated by a fingerprint biometric reader.
This is no doubt one of the least inviolable systems that can be used for apartments and offices safety.
In the past, science fiction movies, made us thinking that one a day a similar system would have eventually been invented, and so it was.
It has now become a reality. Ola is in this field the best smart lock system ever. The lock is the result of a Chinese and American joint venture.
The system exploits a Swedish biometric reader, capable of detecting a fingerprint and to open the door in less than a second.
With this system, smartphones don’t play a major role anymore, as they are only used as a means for managing the device.
In fact, by using the fingerprint reader that is featured on the latest high-end smartphones, it is possible to make a copy of the fingerprint of those who are authorized to enter either with an unlimited or temporary access.
The app is compatible with iOS and Android smartphones equipped with fingerprint detection sensors.
It will record any door opening, the date and the time. The battery life guaranteed by the manufacturer is amazing. 30,000 openings are guaranteed before it is necessary to replace the batteries.

Ola is certainly not the only smart lock with biometric reader available on the market.
There are plenty of companies that are trying to develop products of this kind, and among these, there is also Samsung. The Korean company has developed a kind of futuristic smart lock, code-named SHS-5230, which in addition to the biometric reader also features a coded opening system.
This specific system is especially useful in professional environments.
This lock is constantly evolving and it may be possible, in a near future, to use it for private homes and for home automation.
In this case too, the biometric sensor unlocks access in less than a second and allows to register simultaneously 100 different fingerprints.