Home » NEWS » Featured » Electric scooter: can it be considered as a real means of transport or not?

The classic scooter was born in the early 20thcentury in America as a game for children. Only later on, we realized how comfortable and convenient this small vehicle was. Many adult models were invented to be used for short and medium journeys on the road. A modern evolution of the classic scooter is the electric scooter, a perfect example of sustainable transport, convenient and practical. However, in Italy, the electric scooter doesn’t seem to be very popular.  Why?

Despite the endless search for alternative means of transport, that use green energy and do not pollute, the Italian legislation seems to be far behind on the use of sustainable transports.
The country is not updated to the new needs of the modern driver.
As per the rules of the road, the electric scooter is in an ambiguous situation, with respect to the governing legislation.
The Highway Code defines the electric scooter as a “gait accelerator”, something that looks like skates and skateboards, while being very different from bicycles (including e-bikes) that are defined as “velocipede”.
This legislation also requires that, the so called gaits accelerators cannot be used neither in roadways (under penalty as prescribed in the highway code), nor on bike paths or on pedestrian areas, but only in private areas or in authorized areas for such means.
However, as the electric scooter is a motor vehicle, it is not even comparable to a bicycle.
Thus, the electric scooter must be homologated just like a moped and you must be at least 14 years old and be in possession of at least, a moped driving license.
However, this is not valid if the electric scooter doesn’t have a motor exceeding 6 Km/h. In this case, a license is not required, but it can only be used for recreational purposes, i.e. not as real means of transport and, therefore, it cannot circulate in the street, but only in parks or on private roads.
In conclusion, if on one hand the electric scooter could be a perfect solution to many traffic and environmental sustainability problems, on the other hand the law does not yet allow its use on public roads, preventing this way its development and popularity, that seem to be widely recognized in other nations.
Moreover, it would ensure a large saving on consumptions, related to small journeys. 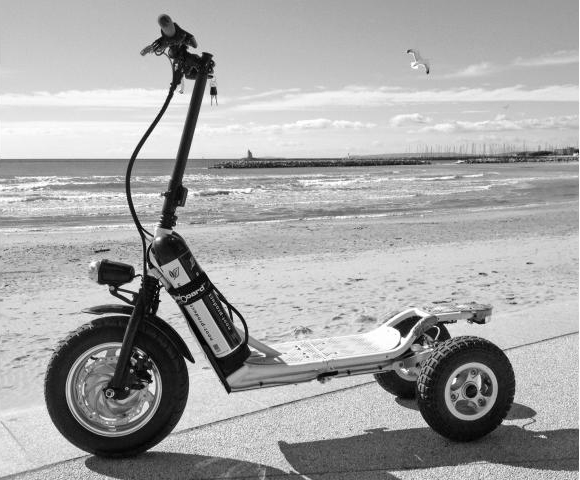 An electric scooter has a number of interesting features that make it a very attractive means of transport (law permitting).
Weight may vary depending on the model, but averages around 30 kilos, a figure that doesn’t only include the frame, but the motor and the battery or batteries as well.
Some models, in fact provide more batteries, usually 3×12 V from 14 A / h, in the case of the most powerful scooters.
Depending on the model, an average speed of around 35km/h, with a maximum of 40 km/h can be reached, for the more agile models, although, because they are hardly used for long trips, the majority of scooters on the market, do not exceeds 20 Km/h.
The battery life of course varies depending on the driving mode and the medium speed and, naturally, also on the type of battery.
However, in terms of mileage, even the most advanced models, in ideal conditions, won’t last for more than 40 km.
Usually, the charging time of a battery for an electric scooter is around 4 to 5 hours.
When purchasing an electric scooter, you should always pay attention to the features of the wheels. i.e. whether they are tired or not, what’s their diameter and whether or not there are shock absorbers.
A special type of electric scooter is the Segway.
Again, as the classic electric scooter, the Segway doesn’t seem to be very popular due to the ambiguous regulations on this type of transport.

The best models of electric scooters

When choosing an electric scooter, it is important to distinguish the models for children, that a part from the size and lower speeds, don’t usually have a saddle, and the models for adults, more compact and powerful, with eventually a saddle.
The choice of the best electric scooter must follow two main recommendations: objective and subjective.
The first, mainly concerns the ratio between the quality/price, that is an analysis of the technical specifications, in particular the type of motor, the battery, and the cost.
The second, however, is a choice that must be made according to personal taste, comfort while driving, if a foldable or conventional scooter is required, and what you will be doing with it.
Razor is a brand that offers excellent models. It showcases three convenient scooters for children and adults, named the Razor E100, the Razor Electric Scooter Navy E90 and the Razor E200.

The Razor E100 is a basic model, light and functional, that takes power via two 12 V batteries, for a maximum speed of 10 km/h.

The E90, however, despite having similar characteristics, reaches a slightly higher speed of 13 km/h.

The Razor E200 is of higher level instead. It reaches up to 19 km/h. It showcases 8-inch tires and has a self-sufficiency of 40 minutes at medium speed.

Instead, the E-scooter Mini Highper is strictly for adults. With a 250 W motor, a 24 V battery and a saddle that ensures greater comfort while on the move, this scooter has a top speed of 20 km/h.

Another compact model is the Egret One V3, by Walberg Urban Electrics GmbH, which reaches a speed of 20 km/h and has an extremely reliable Li-Ion battery.