Several million dollars are invested every year and research projects are carried out on a large scale, to find out more about electricity transmission between continents. If on the one hand, satellite technology and the conquest of impalpable resources amaze us daily, on the other hand power transmission seems to be far behind, strictly linked to the traditional use of cables. If we look at the map that reproduces the routing of lines (of different kinds), we can see that men created a dense network for the distribution of energy or information. Such a network envelops the entire globe (to get an idea and see an interactive map, please click on the following link http://www.cablemap.info). The works reproduced on the map are really impressive and also include communication and fiber optic networks. However, the cables that interest us, are those used for the transmission of electrical energy. The goal of this article is to find out what’s behind electricity transmission between continents. We will try to unveil the secrets of submarine power lines from the beginning of the process, up to the laying of submarine power cables on the seabed. 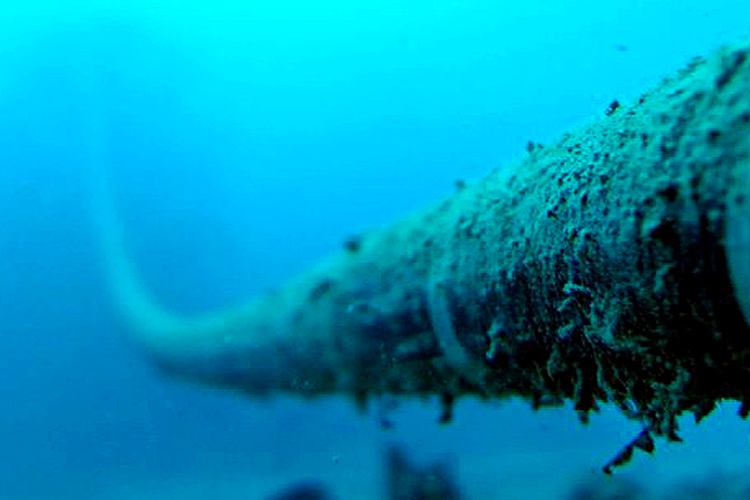 1. Submarine power lines in the world: from a domestic to an international connection.

Since 1972, multiple submarine power lines, have made, through local connections, the transmission of electric energy possible between different continents. In fact, not everyone knows that one of the most impressive works in the industry was carried out in Italy in 2008. The project belonged to the Sardinia-Lazio branch of SA.PE.I. The project consisted of a power supply of ± 500 kV and a rated power of 1000 MW for a total length of 420 km (2 cables x 420 km) and at an incredible depth of 1,600m which was a true record.
The fundamental characteristic of a power line is the fact of being a single branch inserted into a worldwide network. This means that, the Sardinia-Lazio branch integrated with the Italy-Greece branch, interacts with the Egypt-Jordan (Gulf of Akaba) power line, allowing in theory to connect Sardinia to the Middle-East. In other words, these power lines network, that should be normally used for local needs, can be exploited as part of an international network for transferring energy from, and to, other places. That is why, in the future, it is possible that existing power lines will be exploited for distributing energy generated from renewable sources for example in the Sahara Desert.

Please find below some data, that will make you understand the grandeur of the Italian project, realized by Sa.Pe.I.

2 .Main challenges for the construction of a marine power line

The cables used for transmitting energy need, unlike other types of cables, further precaution to avoid dispersion. This is why, it is preferred to transfer energy in the form of direct current and high-voltage. In reality, HVDC cables are mainly used for electrical energy transfer and this precaution allows to greatly reduce the dispersion, thanks to the usage of a less thick insulation.

The planning of large works, such as the creation of power lines between two countries, divided by water is not an easy task. In fact, a part from electrical substations and central conversion there aren’t many big issues. However, major difficulties can be found, when planning the cables route. The problems here are considerable. That is why engineers need to rely on the technical support of geologists and GIS / SIT experts.

While geologists limit their intervention on macro-areas, evaluating the stability and type of the seabed on which wires will be running, GIS/SIT experts instead, carry out the analysis of the type of soil. The analysis carried out by the experts of the Terrestrial Geographic Systems (GIS) is very specific and with the help of a special software, they can reproduce different types of soil, or rather, 3D models of the seabed. These models are used to determine exactly where the cables will be passaging, on specific seabed conformations in order to ensure a perfect laying. These 3D models cannot fail their task, otherwise the entire project will fail.

Cables laying is an amazing process. First of all, the ships used for this kind of purpose are massive, real giants of the sea and they are commonly defined as cable laying ships. These vessels, like all the other ships, depending on the area they operate, must have a certain tonnage and be equipped with advanced electronic equipment. The phase of laying is really vital. Vessels used for these activities, must stand on specific areas. Mistakes are not allowed. Once the laying point has been calculated, the cables are slid from the units, until they are laid on the seabed. The laying operations are followed by mini-submarines and divers who carry out a very risky technical job.

The entire submarine power lines network continues to be used and extra laying projects are underway. In a close future, 70% of renewable energy will be travelling on these submarine highways, carrying electricity from one end of the world to the other.