A “smart” highway that recharges electric cars thanks to solar panels: we are not talking about science fiction, but about a concrete project that very soon could become a reality. 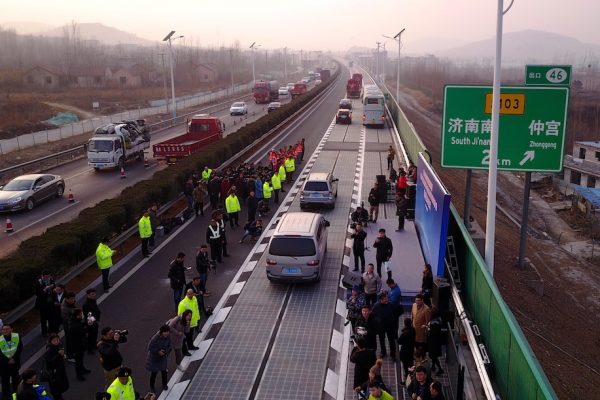 Improving vehicles is not enough to make mobility clean and affordable; the spread of electric cars can be extremely valuable regarding this matter, however, much can also be done to respect the environment and make private transport more efficient by innovating infrastructure.

China’s results on the smart highway

The above mentioned futuristic project has been completed in China by Qilu Transportation Company.
The idea is very clear: to build a highway that is entirely crossed by photovoltaic panels, suitably covered by a material that allows sunlight to shine through but at the same time that can support the weight of vehicles.
This could generate a large amount of electricity, which could also be used to power the same vehicles that travel on the road.

In reality, Qilu Transportation is much more than a simple project: this company has already built a road section with similar characteristics in the city of Jinan. This special section covers a distance of one kilometre, and the surface area of the solar panels installed on the road, under a layer of strong transparent material, amounts to a total of 5.9 km².
Every year, this specific kilometre of road generates as much as one million kWh, an impressive amount of electricity that is used to power as many as 800 homes in the neighbourhood area.

As a matter of fact, the idea seems to be a great success, and Qilu Transportation is working on the possibility of using the energy produced to power the same vehicles that travel the road.
The company’s General Manager, Zhou Yong, has said that such a prospect is absolutely possible: at the moment no car manufacturer is offering electric or hybrid cars that can be powered wirelessly, but this is doable. It seems that there are no obstacles from a technological point of view.

Imagine to travel by your own car while respecting the environment and with no energy consumption, as well as without having to recharge the batteries of your car at a recharging station. This is a really fascinating prospect. And this doesn’t seem to be just a hypothesis: in China, this project is becoming concrete and could become a reality very soon.
Therefore, the objective is to propose a real “independent driving experience”. The Chinese Government has the objective of having 10% of these cars on Chinese roads by 2030.

Which other projects are on the go?

This Eastern European country is not the only country to make a major effort in this direction, as similar projects have been carried out in Canada, the United States and France.
The project that has just been completed in Sweden, in Stockholm, is less high-sounding, but still highly innovative: on a 2-kilometre road section, two tracks have been installed. These tracks allow electric cars to be powered by a special hook.
Therefore, in this case, recharging cars requires a physical connection, unlike what has been done in China.
However, the Swedish project is a very important one. It is a clear sign that more and more areas have now been reserved for electric cars: this Northern European nation has set itself the objective of reducing its “dependence” on fossil fuels by 70%.

The new concept of highway, on which China is working, a road where thanks to solar panels, electric vehicles can move completely independently, has been named “highway 3.0”.
In addition to their excellent energy efficiency, similar roads are meant to be very special for a number of features that could distinguish them.
In fact, by powering vehicles in this way, a wide range of information could be instantly found, for instance, traffic information. The movements made by cars crossing these roads could also be valuable for the updating of navigation maps, or for the management of car accidents or other types of emergencies.
To find out if such a project will become reality, we only need to wait. As far as things have gone and on the basis of what has been seen, this project seems absolutely doable.