Home » NEWS » Featured » Electrical wiring system: what is it and how does it work?

Electricity plays an essential role in our everyday life: lights, home appliances, heating systems, air conditioning, TV, telephones, computers and many other modern devices are powered by electricity. First of all, it is necessary to clarify the different terms used in the electrical engineering industry.

An “electrical power system” can be defined as a network of electrical components used to supply, transform, transfer and distribute electrical energy. An “electrical wiring system” instead, is responsible for powering specific elements within a system, that need electricity to work.
A traditional lighting system, for instance, is made of 1.5 mm² (square millimeters) electric cables connected to a junction box, from where power cables separate to reach specific lighting points.
Therefore, the main purpose of an electrical wiring system is to satisfy the user’s needs and requirements, while coordinating the various components, such as the lighting, heating, and other systems, always complying with protection and safety standards.
A good electrical wiring system doesn’t only need to fulfill the purposes for which it was installed, but must feature a very high level of safety, quality, and flexibility, that will allow an easy maintenance in time, while guaranteeing a continuous and reliable power supply.
The most important feature of a well-functioning electrical wiring system is the reliability.
The system must always and at any time, be reliable and nothing can be left to chance.
Electricity is transported from power stations to homes and businesses, through a series of underground power lines, common utility ducts and utility poles.
The transmission network operates by lowering tension while getting closer to the final user: energy is directly delivered through insulated cables, to the private electricity meter.
What happens is that electricity current doesn’t really flow through the electricity sockets of the house, but it generates a 220 V voltage – measured in volts – that activates when connected to a plug. The electricity meter is the main distribution board, that manages electrical circuits running along the house and it allows lights and electrical devices to work properly.
A circuit, by definition, is a circular path that starts and ends in the same place.
This essentially represents the operating mode of electrical energy. Secondary boards can be installed in other areas of the house, while always being connected to the main board.
They will supply energy to a number of circuits, or will supply electricity to more powerful appliances, such as those in the kitchen or in the laundry.
These secondary boards feature a series of secondary switches.

Working principles and features of an electrical wiring system: from traditional systems to home automation

A traditional electrical wiring system consists of power distribution networks and exploits a series of exact and precise mechanisms for the supply and consumption of electricity.
However, great strides have been made in the energy industry, such as the possibility of using alternative energy sources i.e. wind and solar powers, etc., to ensure energy savings and, at the same time, to improve the environmental impact.
In this regard, new researches have been carried out on the development of new “smart” distribution networks.
Through the so-called smart grids, these new networks are capable of allocating existing locally- produced energy surplus, elsewhere.
Specific software manages these automation systems.
To ensure greater energy savings, the software integrates the systems with other sources of renewable energy – which is normally more variable and less reliable – and with electricity supplied by power generators.
It’s been a while since home automation systems have become a more popular solution when it comes to choosing the most innovative electrical wiring system.
The term “home automation” can be used for singular programmable devices, such as thermostats or irrigation systems, even though it used to describe more specifically all those houses where almost everything – lights, appliances, electrical sockets, heating, and air conditioning systems – is connected to a network that can be remotely controlled.
From a safety point of view, these systems also include alarm systems, door, window and lock security, smoke detectors, surveillance cameras, and any other connected sensors.
Until recently, home automation systems could only be found in large commercial buildings or in very expensive homes. Normally, only the lighting, the heating, and the air-conditioning systems could have been monitored by these systems.
The so-called building automation couldn’t manage more advanced systems and the monitoring and the programming of functions was only accessible by specific checkpoints within the building premises.
Today, however, we have reached a condition where home automation is accessible to everyone.
Home automation is a step away from being called the “Internet of Things”, where everything has an assigned IP address, and where every single object can be monitored remotely.
The first to benefit from this new technology are the so-called “smart” devices and all of those devices that can be connected to a local network, via the Ethernet or the Wi-Fi. However, electric power systems and even individual items, such as switches and sockets, can now be integrated into a greater home automation network.
Automation is obviously one of the main features of home automation. 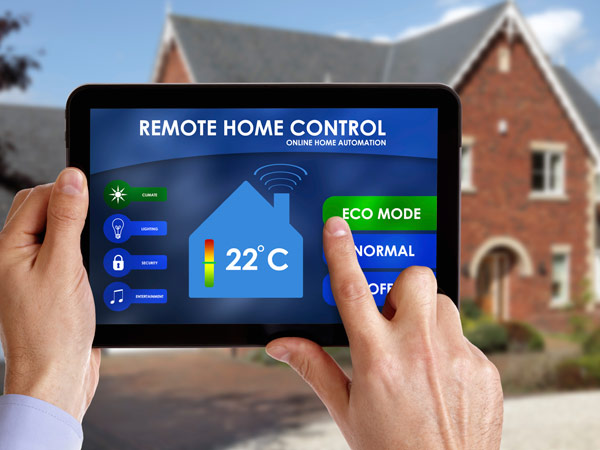 Automation refers to the possibility of planning and programming devices that are connected to a network.
Thanks to home automation, you can control, for instance, the lighting system timing during specific moments of the day.
You can also plan to turn on all the lights in the house when the security alarm system is on.
Once you begin to understand the possibilities of home automation, you can imagine and design a series of useful and creative solutions to make your life better, easier and safer.
If for instance, the west-facing window lets in too much light, you will just need to connect the motorized blinds to a “smart” plug and program them in such a way, that every day at noon, they close automatically.
If someone has to enter in the house for walking the dog every day at the same time, you simply need to program the home automation system, to unlock the front door at a specific time of the day and to lock it again at the exit, and so on.

What do we mean by electrical wiring system automation?

The main difference between a traditional electrical wiring system and the so-called “smart” system is the use of technology during designing and installation.
Let’s think about the lighting system: the most peculiar feature of a smart home regards the fact that there is no connection between the button and the light. We are used to pressing a single button to turn on a single light in our houses, and these two elements are connected through an electric cable.
On the contrary, in a home where a home automation system was installed, on the back of the power buttons, programmable electronic modules, that can be remotely managed, have been previously installed. They receive the input from the button inside of the junction boxes.
But the main feature of this electronic device is to transform a piece of information into a digital version. This process is made possible thanks to the so-called BUS cables, thinner than traditional electrical cables that can be more manageable via a remote software.
By connecting all the different electronic modules distributed within the household, you create a network made of information, that can be programmed and automated depending on your needs.
Unlike a traditional electric system that needs a physical connection between a button and a light, in a smart electrical system, buttons can send different commands.
They react depending on different purposes and needs by simply using a software via a computer or a smartphone.
Moreover, the 12V BUS cable is made of three wires of 0.5 mm². Thanks to their small diameter these cables don’t take too much space. That’s why they are very often used to replace the traditional electrical 220V wires.
Flexibility, user-friendliness, and energy-saving represent the strengths of a home automation electrical system, making it the most recommended system when renovating old houses or building new ones.
Other than being a solution for managing the lighting system, home automation has to be imagined as a solution that includes every aspect of the life of a house.
Thanks to computer intelligence you can create highly customized automation systems that can simplify your everyday life while increasing the degree of safety and reducing costs related to electricity consumption.