Home » NEWS » Company news » Tesla Powerwall – What is it and how does it work?

The innovative electrical energy storage known as Tesla Powerwall seems to be very popular. This home device allows minimizing the taking of electricity from the main grid. Only a few months after the release of the battery, the American company Tesla Motors received orders for over 38,000 units.The Powerpack, a most powerful battery, designed for business and industry use only, was very popular too. The company received over 2,800 orders for this product. According to the CEO Elon Musk, due to the high number of orders and the amazing reaction of the public, the company’s factories will be busy until the first half of 2016. If the number of orders keeps on rising, the factory will be probably busy for longer. These models have been launched on the market on 30 April 2015, and many marketing campaigns and information materials have followed, thus convincing clients to buy these devices.

What is the Powerwall battery?

The Powerwall consists of a lithium battery with a total of 6.4 kWh of storage capacity. This battery provides enough electricity to meet the household evening and night energy requirements. The energy is stored during the day through a photovoltaic generator. If more energy is required, you can install multiple batteries together. Tesla Powerwall battery delivers a current of 9.5 A with a 350-450 V tension. The system inverter will bring it up to 220 V, a suitable voltage for the European and Italian markets. The electric discharge arrives up to 100%, this means that the stored energy can be consumed entirely without the battery being damaged.

Therefore, 1000 life cycles are expected, the warranty lasts for 10 years and the battery delivers 2 kWh continuously and reaches up to 3,3 kWh. However, to ensure higher charge/ discharge cycles, you should never run out of battery and always be around 80%. More are the cycles of the battery, greater is the duration. 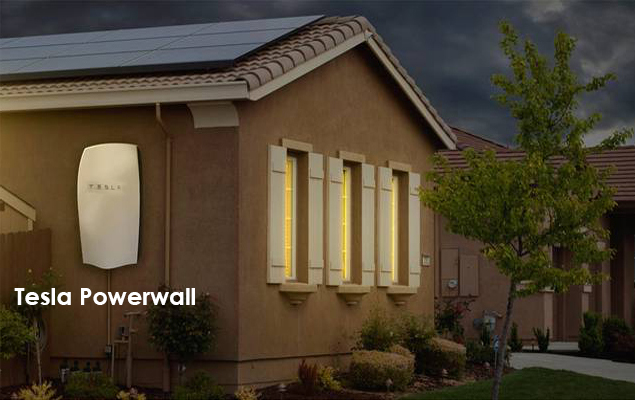 The house Powerwall battery is equipped with a system for temperature control, thus reducing the risk of fire, a possibility not to be underestimated for lithium batteries.
It has an interface that is directly connected to the inverter that monitors the production and energy consumption. Its weight is about 100 kilos. It has a height of 130 cm and is 86 cm wide, with a depth of just 18 centimeters. It can be installed either inside or outside.
The Tesla battery has been created with the idea of optimizing energy consumption associated to a photovoltaic system, but the battery can also be used to prevent a blackout, or to absorb energy consumption loads in the higher charging times. In addition to the existing model for households, another model has been invented for businesses: the Powerwall.
The Powerwall battery can be installed at the same time, until a total capacity of 63 kWh has been reached. The only drawback is the fact that the battery requires a compatible inverter, able to be used with the accumulations, capable of working as a charge controller and able to handle the various loads. Regarding its retail price, Tesla Powerwall appears to be pretty expensive, but the fact it requires a compatible inverter, even without photovoltaics, raises some doubts about its real final price.
In 2015, the retail price of a Powerwall battery was $ 3500, as advertised on the Tesla Motors website.

Tesla Powerwall exploits the Lithium Ions technology. Lithium ions have a storage capacity of 110 to 160 Wh./kg. If the total weight of the Powerwall really is 100 kg, excluding the shell and its components, the battery itself should weigh 80Kg, with an accumulation average of 120 Wh. per kg.

Compared to the cheapest and most common batteries, such as lead batteries, Tesla lithium batteries are able to virtually provide all the energy stored without getting damaged. Lead batteries instead must have a discharge of 50% on average, for not being damaged in a short time. A 6.4 kWh Tesla battery delivers up to 100% of stored energy, while a lead battery delivers a maximum of 3.2 kWh. You may decide to use all the energy stored in the lead battery, but this involves a higher attrition and the impossibility to use the system until it has been recharged again. Lithium batteries are more expensive, but they have a better efficiency and durability. Therefore, they have a much lower environmental impact.

The costs of the Tesla Powerwall storage system

In 2015, the retail price of the Powerwall storage system for households was of $3,500 in the United States (installation excluded). Nowadays, its retail price in Europe and in Italy is probably higher. Moreover, a power inverter is required to bring the current to a 200 V voltage, compatible with the household grid. Those who already have photovoltaics, can replace the inverter. The cost for a Tesla Powerwall system (installation included) does not cost less than €7,000, a price that matches with the retail price of lithium storage systems over 6 kWh. After all, those who decide to install Tesla Powerwall along with a photovoltaic system can save some money by installing the two systems at the same time. If the average price of an all-inclusive 3kW photovoltaic system is of about €6000, by installing the Tesla storage system you would spend less than €12,000. However, the system is highly recommended for those with a high energy consumption. Those who have an energy consumption below the average should carefully choose the type of system to install, to avoid incurring useless expenses.

How much power storage do you need to install?

To find the most suitable power storage system for your needs, it is necessary to start from the analysis of the average consumption in the F2 and F3 time slots, i.e. evening and night. Considering these results it is possible to check the amount of storage you actually need. If the average consumption reaches about 4 kWh for instance, the Tesla Powerwall could represent a valid solution if it was installed along with a photovoltaic system. For those with a lower energy consumption, this solution might not be convenient, unless a system to face frequent power failure problems was needed. In this case, the installation of Tesla Powerwall represents one of the best choices you can make.