The progress of Wi-Fi technologies has deeply influenced our daily lives. In the last ten years, our houses and offices have become the target of the most advanced home automation systems. Thanks to these new technologies, a long series of manual operations have now been automated and have significantly increased our safety, comfort and productivity of the house. Modern home automation networks manage several different tasks, such as: monitoring the entrance and exit zones, managing video surveillance and alarm systems, adjusting the home temperature, opening/closing the shutters, switching on and off the lighting system, turning on and off the speakers and many more systems. Smart Locks can be considered as smaller components of a greater home automation system, featuring highly technological solutions. In the next few paragraphs, we will talk about a specific smart lock, named ″AUGUST″.

August or a new future for the house safety

August was founded by Jason Johnson and Yves Behar. During its 20 years of activity, the company has become part of the top-ten best companies offering home automation solutions for access control. August devices are simple and highly reliable, extremely competitive and hardly replaceable.
August Smart Lock reflects the two co-founders’ philosophy, i.e. “the door of the house must not only keep the bad guys out”.
A door must be able to let the right people in at the right time in the right way and always under the control of the owner of the house.
This particular vision of the door has given them the idea to design devices and services that allow you to monitor and manage the entrance of your house, remotely. August’s aim is to help making your life easier and more secure.

Among all the home automation gadgets available on the market, August Smart Lock is one of the best.
The idea of entering and leaving the house without having to turn the keys in the patch is really interesting.
This is possible by integrating August Lock in a simple home automation system that interacts, via the Internet, with a smartphone App and August Connect.
Furthermore, the kit Smart Lock can be integrated with August Smart keypad and August Doorbell CAM which increases the performance and comfort of use.

A new design and hardware for August Smart Lock

The design of August Smart Lock is simple, refined and exciting. Colours, sizes and shapes match perfectly with any home decor without being too intrusive. The device is divided into two components: the box and a patch. The box has a round shape with dimensions comparable to a roll of adhesive tape, while the patch is similar to a traditional lock. The box is installed on the inner side of the door, while the patch is installed, in a symmetrical way, on the outer side of the door. Therefore, August Smart Lock does not replace the traditional lock but improves it, with cutting-edge technologies and a stylish design. August Smart Lock performance can be even better if integrated with specific accessory devices, provided with the August Kit.

It is a small rectangular keypad that allows you to enter the code for the opening and closing of the door.
In other words, it is an electronic key with a RFID CODE, i.e. Radio-frequency identification. 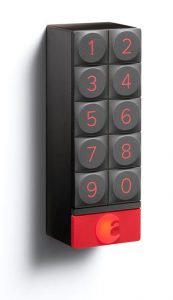 The advantage of this device is to ensure the interaction with the access system without using smartphones and keys.
It should, however, be pointed out that the Keypad implements a pre-existing scenario without eliminating or limiting other possibilities of interaction as the classical key and/or smartphones.

August CONNECT is the app that allows you to interact with August Smart Lock via your smartphone. 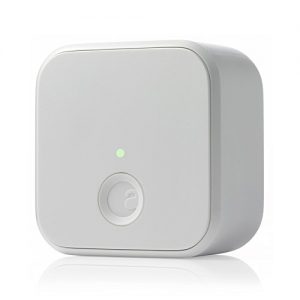 Through this gadget, you will always be informed of the status of the closure and opening of the main access of the premises.
In addition, a special alarm allows you to know the status of the device functionality, i.e. on-line / off-line.

It is a bell equipped with a camera.
This device allows you to interact, via your smartphone, with those who “knocks” at the door of the house when you are away from your place. 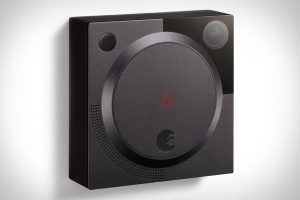 Smart Lock allows you to easily and effectively create specifically planned scenarios, which ensure the locking and unlocking of the door, in a completely automated and secure way.
For example, you can adjust, within a pre-set time, after having entered the house, an auto-lock command of the door.
Usually, the auto-block command activates after 100 seconds from the opening and frees the user by automatically locking the door.
The same functionality works when leaving the house.
Basically, once you leave the house, you don’t have to worry about anything, as August Smart Lock does everything for you, ensuring a maximum security.
Through the Internet connection and thanks to the doorbell device, it is possible to receive alerts when someone rings the bell of your house.
The device allows you, via a smartphone, to see and speak with visitors, allowing also to open the door and let them in once they have been recognised.
Moreover, the Cam Doorbell allows you to receive alarms even when none rings the bell.
Basically, a motion sensor identifies people transiting in front of the entrance without ringing the bell, and this increases considerably the house safety standards.

Conclusions It is clear that August Smart Lock is a jewel of advanced home automation technology.
However, it only represents a small part of a greater network, the Smarter Home Access.
Smarter Home Access is manufactured by August and is the ideal bodyguard, as it guarantees a constant surveillance of the house entrance.
If you wish to know more and would like to purchase this product you can browse the following link http://august.com