Our extremely modern and overly hectic daily life has made us used to the best technologies to improve our lifestyle. The Hyperloop project can be considered as part of these new technologies as it could seriously revolutionize the transport industry.

Modern society made us used to eliminating distances. Let’s think of applications, such as Skype, that still makes two people living at the two corners of the world feel closer.

However, as time goes by, there has been the need of inventing modern means of transport allowing to travel long distances in very little time. But all this wasn’t still enough to satisfy people’s needs, mainly travelers’. Therefore, technologies needed to be improved and get more sophisticated. That is the reason why, Elon Musk, presented his project called the Hyperloop, that made everybody speechless. 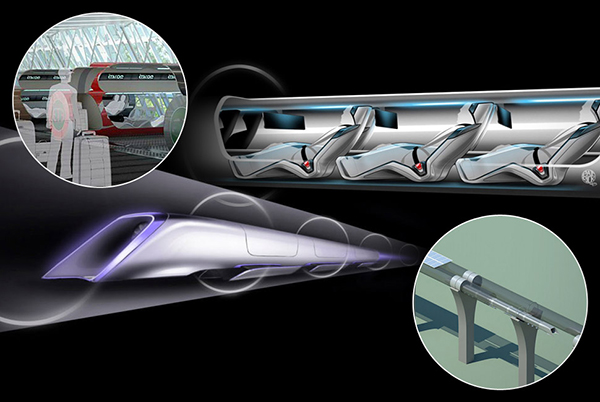 This project concerns the transport industry and aims at connecting, in just 30 minutes, the cities of San Francisco and Los Angeles, that are approximately 600 km far one from the other. This will be possible thanks to the intervention of high-speed means of transport, that will travel with an average speed of 965 km/h, reaching a maximum speed of 1200 km/h.

The project cost will vary from $6 to $16 billion that corresponds approximately to €5 to €13 billion, and the price will depend on the different technologies that will be used. The reason for this high cost is due to the capsules that will be suspended electromagnetically in every gallery.

The system will use a fan, probably placed at the rear of the capsule, that will suck the air from the inside, to get it out from the top of the capsule. This mechanism aims at contrasting, or at least reducing friction: the wagons resistance to air is very low, and there is no resistance to the rail because there isn’t any physical contact. Basically, the system used is like magnetic levitation, but in the Hyperloop project, the system is much more secure and efficient. To better understand Elon Musk’s project, we should specify that today there aren’t any trains capable of carrying passengers and goods, within the tunnel where the vacuum is created, but only capsules. Every single capsule will be about 5 meters long and will weigh no more than 185 kg. These features will allow the capsules to transport up to twenty-eight people at the same time.

Experts, who already assessed the Hyperloop project, tried to identify the advantages and possible disadvantages of this project. Meanwhile, on May 11, the startup, called the Hyperloop One, responsible for manufacturing the capsules, carried out a test in the Nevada desert, where they are building a test track.
However, the test didn’t last that long, only two seconds, since many extra features have yet to be made, such as the brakes of the capsules.
A 3 meters long capsule was used for the test. The capsule covered 300 meters at the speed of 187 km. Since the breaks of the first capsule haven’t been invented yet, researchers decided to stop the capsule journey by crashing it against a sandy mountain, that was designed especially for the project.
Many people disagreed with the test, since it wasn’t done with a true capsule, but simply with a kind of a sled mounted on the rails of a very short track.
Experts explained how this first test was essential to test the propulsion mechanism.
Moreover, even though the test was really short, it was long enough to prove that it is possible to achieve high speeds in a few seconds, yet maintaining a certain stability. This seems to be the secret of this new technology that will revolutionize the transport industry.
The higher the speed of the capsules is, the greater the stability of these structures will be. Therefore, researchers were more than satisfied with their first try, where they could test the propulsion system in an open space and they really hope that they will be able to implement this technology in a few years.
This will be made possible thanks to the funding allocated for the implementation of this project.

If you wish to learn more, you can watch the video of the test carried out in the Nevada Desert. The video aims at clarifying the way this mechanism works. http://m.swzone.it/video/42128_Hyperloop_One__primo_test_del_treno_che_raggiunge_i_187_km_orari_in_meno_di_2_secondi.html

This project has many advantages. First of all, we should focus on the economic aspect of this project.
The amount of money invested in the implementation of this new technology would be less than the money invested in building a high-speed railway network.

Another advantage would regard travelers since the ticket would only cost $100 for a journey that goes from the west to the east coast of the United States. Finally, this new means of transport aims to be energy-efficient and completely environmentally friendly. The Hyperloop system could also make the tour of the world in only 6 hours possible.